Terry Crews Talks About New Sitcom ‘Are We There Yet?’ And his Real-Life Blended Family 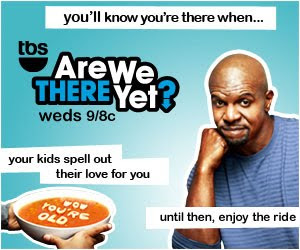 This past Monday I had the pleasure of interviewing actor Terry Crews (Everybody Hates Chris) and we talked all about his new sitcom ‘Are We There Yet?’ on TBS. The sitcom is based on Ice Cube’s movie of the same name. Crews plays Nick, the new husband and new step father whose blended family faces the challenges of everyday life with the kind of humor we all can relate to. What makes his role even more interesting is the fact that Terry Crews has a lot more in common with his character Nick than you might have known.

Interviewer - LaShanda Henry: “Terry, over the past few years we’ve seen you play different types of hilarious characters and I think it’s interesting that on TV we now see you in different father figure roles. From your role as Julius on Every Body Hates Chris, to your reality show the Family Crews, and now Are We There Yet. How is new step father Nick, different from Julius and the real-life Terry Crews?”

Terry Crews: “On Everybody Hates Chris, I was channeling my father for that role. Everybody thinks I’m cheap in real life, but I’m not. (lol) My father grew up in Georgia and life was a struggle, so it was his experiences that I channeled into for the character of Julius. For my reality show, it’s actually harder to play yourself than it is to act. Eventually though, you get used to the cameras being around. Like the character Nick, I like being a playful guy and having fun with my kids. I also have a blended family. When I met my wife, she was a single mom. When we got married, my step daughter was two and she hated me (lol). Our experiences back then remind me of the show and the challenges of being a step dad.”

LaShanda Henry: “When you saw the script, what else attracted you to playing this character?”

Terry Crews: “I love this character because he reminds me of myself before the family. Most guys do not mature when they are single. In arguments, men have a tendency to shrink back while women tend to want to dig deeper and address the issue. Being in a family man helps you mature. The character Nick is into football, so he always likes to ‘tackle’ their challenges and face them together, as a family.”

LaShanda Henry: “In any conversation about black families on television, the Cosby Show often comes up as the ideal black family. Do you think in your new sitcom we are looking at the ideal blended family or something else?”

Terry Crews: “I think we are looking at the image of a family that is more timely and honest. In the old days some couples weren’t that happy and they felt stuck in their marriages. Now there is more freedom to make choices that are best for you as a person. For example, my wife on the show Suzanne played by Essence Atkins, got out of a relationship that wasn’t working for her and chose my character Nick. In reality, I’ve been blessed to have a wife that I have been married to for 21 years and will stay married to forever. But I think being able to make choices that are best for you is a healthy way to be.”

LaShanda Henry: “Just being a new husband is challenging enough, what is it like also jumping into the role of stepfather to teenagers.”

Terry Crews: “God made teenagers so you can be happy when the leave home (lol). Seriously, on the show Nick walks into this dynamic family structure on top of being a newlywed. It takes a strong person to deal with this, but Nick always wants to tackle the challenge.”

LaShanda Henry: “Teenagers can be rough and it is not unusual for them to disconnect from their parents once they hit this stage. To be a step parent on top of this reality has to be hard. Any words of wisdom for those in similar situations?”

Terry Crews: “Over the years I came to realize your kids don’t love you. Your kids need you to take care of them and over time they learn to love you. By you always showing them love, that is how they learn. The Bibles says love is patient, my kids are not patient. The Bible says love is kind, my kids are not kind (lol). However, as they grow and mature they develop the kind of love for you that you now have for your parents. I see parents get their feelings hurt all the time. A mom will reach down to give her toddler a kiss and he wacks her with his toy (lol). As a parent, don’t get your feelings hurt when your kids do not react they way you would like them to. Just know they are just being who they are, keep loving them and showing them what real love is.”

LaShanda Henry: “What can we expect to see in the future on Are We There yet?”

Terry Crews: “Charlie Murphy plays the ex-husband and he is hilarious. Nick is dealing with that, plus his mom, played by the amazing Telma Hopkins, who by the way is not happy with the marriage or the idea of being grandma so there is a lot of drama to be seen. The nature of good TV is always great drama. In the first 10 episodes we are introducing the family to you, Essence Atkins who plays my wife is wonderful and the kids are great as well. We have some good people working on the show and so much more to do and share by the second season.”

Terry Crews had me laughing and nodding my head throughout the entire interview. He’s a great guy in an amazing new show. You can watch episodes of ‘Are We There Yet’ on TBS or right now on TBS.com.